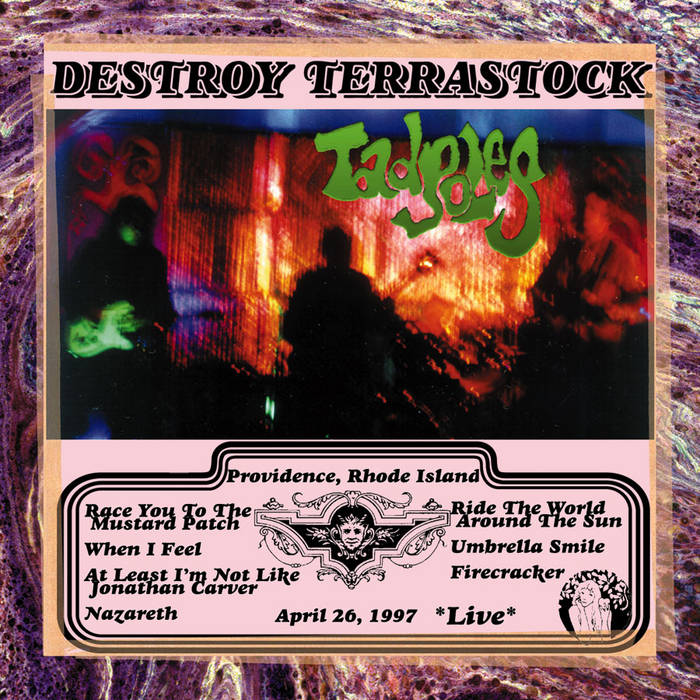 Richard RR If you like Hawkwind you will like Tadpoles! Hot live album! Favorite track: At Least I'm Not Jonathan Carver (live).

Destroy Terrastock - Live (1998) is the only live album released on CD by Tadpoles. Upon original release, Bakery Records included a copy of Tadpoles Destroy Terrastock - Live with all mail-orders for Smoke Ghost. The album was later made available for sale on its own. Recorded live at the first Terrastock music festival on April 25-27, 1997 at The Rogue Lounge in Providence, RI. This recording contains Tadpoles entire set.

Terrastock review- “One of the most well-received bands were Hoboken’s Tadpoles..the most classically “psychedelic” of any band at the festival and the the same time, the most polished. “
–JERSEY JOURNAL (Jim Testa, May 3, 1997)

Destroy Terrastock - Live was recorded live to digital multi-track and was mixed by Tadpoles without additional overdubs. Album artwork and design was created by Ann Manca. The cover and title is a take on a bootleg album by Kiss called "Kiss Destroys Anaheim." Mastered by Todd Parker at dbs digital in Hoboken, NJ.