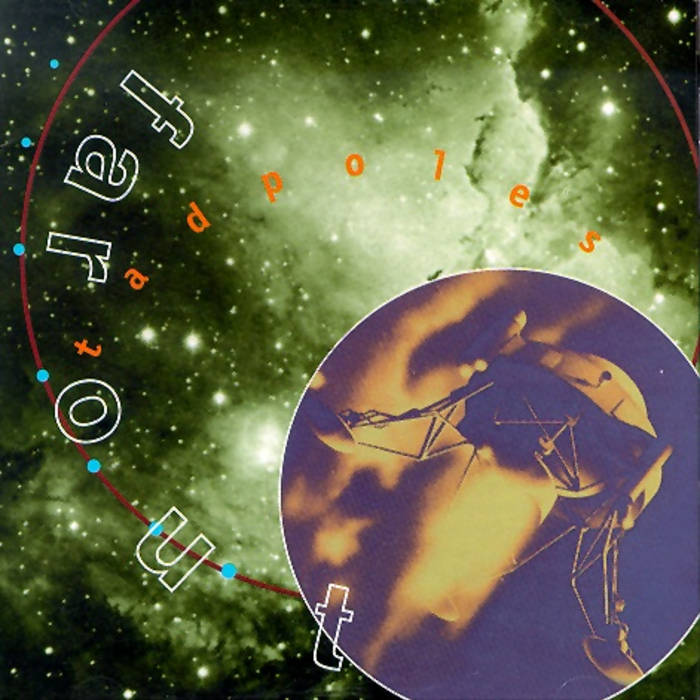 Far Out (1996) is the second full length album released on CD by Tadpoles. The album was recorded by the core trio of Todd Parker, David Max and Nick Kramer after drummer, Michael Kite Audino and guitarist Andrew Jackson Shapiro left the group. Guest musicians Edward Odowd (The Toilet Boys / Psychic TV) and Steve Savoca (The Werefrogs) perform drums and percussion on the album. Additional lap steel guitar was provided by Jeff Passifiume (Hank McCoy and The Dead Ringers / The Lost Continentals). "Ride The World Around The Sun" is a re-recording of the song, "Sunshine" from the Tadpoles' Superwhip cassette-only album from 1992. "Old Dirty Mushrooms" was included as a bonus track on the CD version of the album and was not included on the cassette version. "Old Dirty Mushrooms" was recorded in 1991 and features just Todd Parker and drummer, Michael Kite Audino, along with sax by Raj Seshu. Far Out is notable in that it received a 4-star review from Rolling Stone Magazine, a rare feat at the time for an independently released CD.


“ “★★★★” Taking the approach of all great psychedelic rockers,Tadpoles & producer, Kramer, treat
the studio like a playground, crafting mini symphonies from layers of weird guitars, six-string fuzz bass and impressionistic vocals. Its a heady mix that deserves to disorient a much wider audience.”
–ROLLING STONE (Jim DeRogatis, May 30, 1996) “ ...like a kinder, gentler Monster Magnet touched up with a bit of classic Doors-like themes”
–MAGNET (Gina Bittner, #24, ‘96) “...a psychedelic trio from Hoboken, NJ, who have released two killer indie guitar albums”
–GUITAR WORLD (May 1997)
“...this Hoboken band takes out the tricks of Sonic Boom,Wayne Kramer, and even something from the Strawberry Alarm Clock to mold a guitar geek’s landscape of mesmerizing chords and pulsing rhythms..” –CARBON 14(Kevin McDonough, #9, ‘96)
“Far Out is an almost flawless psychedelic album on which every song is about as good as the next one...one of the better American CDs of ‘96” –CROHINGA WELL (Belgium-#13 ‘May 1997)
“With the Lilys giving up the Loop drone for early Syd Barrett psycho-pop,Tadpoles may be the American claimants of the space-rock crown.” –FACE MAGAZINE (Seth Berner, Feb. 1997)
“the full on execution makes them more Blue Cheer than Love, and the quieter space rock passages give up a countrified nod in the direction of Up on the Sun era, Meat Puppets and Syd’s Pink Floyd...they get further and further out to an alternate universe where Kramer produces million-selling records and Gibby is president.” –EXCLAIM! (Neil Exall,Toronto, Oct.‘96)
“If Echo and the Bunnymen’s Ian McCulloch bought a vintage theater, enveloped the giant screen in fuzz, cut the lights, and put Tones on Tail, Syd Barrett, the Swans, and the Jesus and Mary Chain on the balcony- then handed out the shrooms-you would be close to experiencing the Tadpoles.” –EYE (Lisa Crosby, #9 ‘97)
“Far Out by Hoboken-based Tadpoles is the latest gem wearing the Shimmy Disc producer’s imprint. Thrashy psych abounds with Spacemen 3 and 13th Floor Elevators influence just winning on points” -MOJO (UK, June 1996)
“Tadpoles specialize in stoned-out psychedelic jams...” –OCULUS ( Frank Tantilla, June 1996)
“remind me of Syd Barrett doing doughnuts in the grocery store parking lot...” –JERSEY BEAT (Greg Matherly,August 1996)“

In these days of alternativerock mania, when groups that have played three gigs sign million-dollar deals, the bands that labor on indie labels come in two varieties: those doing something so perversely unlistenable that no one else will release it and those less interested in careerism than in following their own quirky muses. The Hoboken, N.J., trio Tadpoles fall into the latter category.
There's a timeless quality to the band's second do-it- yourself album: Tunes such as "Feel Like a Freak" and "At Least I'm Not Like Jonathan Carver" are equally influenced by Syd Barrett, the 13th Floor Elevators, My Bloody Valentine and the Flaming Lips. Taking the approach of all great psychedelic rockers, Tadpoles and producer Kramer (Bongwater, Galaxie 500) treat the studio like a playground, crafting minisymphonies from layers of weird guitars, six-string fuzz bass and impressionistic vocals. It's a heady mix that deserves to disorient a much wider audience.
Jim DeRogatis - Rolling Stone (May 30, 1996)

Far Out was produced and mixed by Mark Kramer (Shimmy Disc) and engineered by Steve Watson at Noise New Jersey Studio in 1994-1995 with additional recording at Waterfront Studio in Hoboken, NJ. Album artwork and design was created by Ann Manca. Mastered by Dave Steele at dbs digital in Hoboken, NJ.