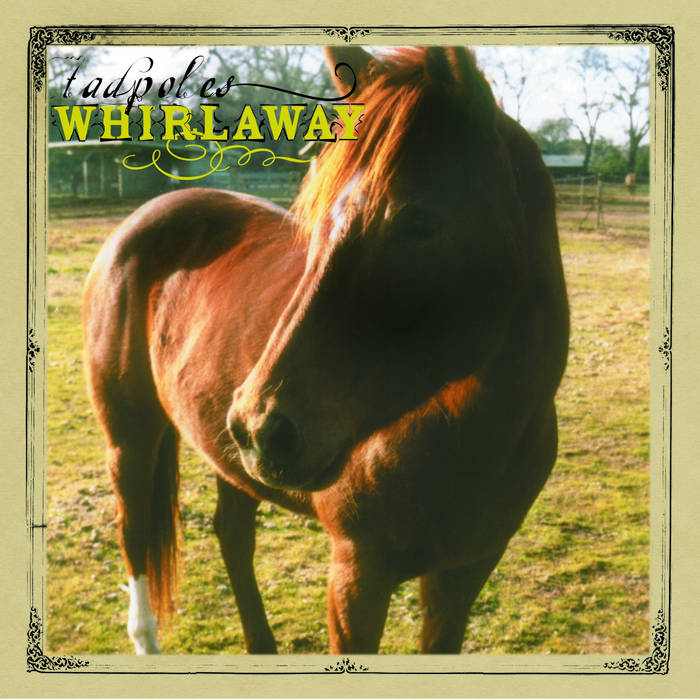 Whirlaway (1999) is the fourth and final full length studio album released on CD by Tadpoles and is the first Tadpoles' album to be released by a label other than the band's own Bakery Records. Australian independent label, Camera Obscura Records, licensed and released the album worldwide. As a promotion in 1999, an edited MP3 version of the song "Whirlaway" was given away free from by Camera Obscura Records through their website. Additionally, this was the first studio album by Tadpoles not produced by Mark Kramer (Shimmy Disc) at Noise New Jersey, although Mark Kramer did record the album's final track, Horse and Buggy at New York City's Knitting Factory. The album was recorded by Pete Drivere at Ampreon Recorder in Youngstown, Ohio and features a cover version of Bob Dylan's Basement Tapes classic, You Ain't Goin' Nowhere.


Reviews -Whirlaway
...among the finest realities of last lustres American psychedelia, a solid quartet able to change their expressive valence in the course of a few chords, roaming from the wildest space-rock to the utmost visionary country folk...ROCKERILLA (Italy) on WHIRLAWAY

...not only masters of the pop song idiom, but also willing connoisseurs of the absinthe of psychedelic excess...THE BROKEN FACE (Sweden) on WHIRLAWAY

...an altogether solid work, with a scattering of infectious euphoria throughout...PITCHFORK.COM (USA) on WHIRLAWAY

...a candid enunciation of what is universal and eternal about psychedelic music: not the drugs, but the bounded creativity, the flight of the caged soul...SCARUFFI.COM (USA/Italy)
on WHIRLAWAY

...Investigating large expanses of time and sound, they are without a shadow of doubt, the defining psychedelic sounds of now ...ZEITGEIST (Scotland) on WHIRLAWAY

A Day Late: Tadpoles—Whirlaway Tadpoles—Whirlaway
An absolute must have. Beginning with the 1-2 punch of the galloping “Frances the Dancer ” and the heavy “Lyman Bostock” right through to the end, it’s a solid, smoky buffet of sonics. All Tadpoles releases were hazy gems, but on Whirlaway it all comes together to make, for me, their signature disc. If you follow Ptolemaic Terrascope or have yearned to attend Terrastock (like me ...), then this has your name all over it. Comparisons don’t do justice, especially when it’s as fully baked as this, but if you get into, say,
the Bevis Frond, or dreamed about a faster, fuzzier 7% Solution, then grab that dog-eared issue of the Terrascope, get out some snacks and have a seat. It’s time to go for a ride.
Many of the neo-psych groups your assailed with rely on coughing up old touchstones from some simulacrum of pastoral, quirky Englishness. Tadpoles get their cue not from the English fields or their misty woods, but rather from some musty hillock buried in the garage drip fed Nuggets. The Tadpoles are decidely American. And that sets them apart by rooting Whirlaway in good old rock. It smokes. Or rather it’s in a state of perpetual slow-burn. That rough, deceptively shambolic rock base and a firm grasp of melody set them apart from wandering noodling contemporary minstrels. No twee, whispy vocals here either. The often cracking vocals and semi-impenetrable lyrics coupled with the smoky, druggy guitars and bubbling bottom-end give the whole affair a very natural, organic weave. You can digest Whirlaway just as surface candy if you want, but if you go in for the long haul, the payback is far more filling: consumate musicianship, great production and mix, stellar layering of details, good drawn out crunchy rock and a throbbing locomotion gauranteed to see you all the way over to the other side. And they’ll get you there without relying on the ferryman to get you across the river. Tadpoles will drive you there themselves. In a GTO. Even if they promise a “Horse and Buggy” at the finish line.
Kevin McFadin - Mr. Atavist Blog (Sep 29, 2009)

Whirlaway was engineered and mixed by Pete Drivere at Ampreon Recorder in Youngstown, Ohio in 1998 and 1999. Additional overdubs and mixes were done at Jolly Roger Studio in Hoboken, NJ by Gene Holder (the dB's). Album artwork and design was created by Ann Manca. Mastered by Todd Parker at dbs digital in Hoboken, NJ.